When you’ve been spending time out on the water of Lake Ontario, you’ve probably heard a less than flattering description of a man’s larger than normal breasts, “man boobs.” Most people don’t give much thought to male breasts, unless you’re the person with them. If you’re a male with enlarged breasts, you’re most likely trying to cover up and keep them under wraps.

Unfortunately, common beliefs incorrectly assume that large male breasts are simply the result of weight gain, similar to the way a woman’s breasts often grow with some added pounds. This can be true with men, but enlarged breasts can also be a condition called gynecomastia, colloquially known as male breast enlargement.

The team at The Plastic Surgery Group of Rochester can perform male breast reduction surgery and give you back your self-confidence again.

Gynecomastia, a word of Greek origin meaning “woman-like breasts,” can affect one or both breasts. The condition is common and well understood in teenage boys, but is somewhat of a mystery in adult men.

It’s believed that around half of all men suffer from gynecomastia. Most men never do anything about it or even suspect it of being a “condition.” But having enlarged breasts can really impact a man’s self-esteem.

Three quarters of all teenage boys have gynecomastia to some degree. It’s a direct result of puberty, where estrogen and testosterone levels can be off the charts, leading to enlarged breasts, along with acne and other teenage issues. Luckily for teenagers, once puberty ends so does their gynecomastia in the vast majority of cases. In adults, breast enlargement usually arises in middle-aged and older men. This is a time of shifting hormones, too, which is thought to play a role.

It is also believed that certain medications have links to gynecomastia:

Steroids, in particular, are linked to enlarged breast development in men due to their hormonal makeup. Heavy drinking and marijuana use are also thought to be triggers.

Am I A Candidate For Male Breast Reduction?

If you’re overly self-conscious about the over-development of your breasts, breast reduction would probably help you. Many cases of gynecomastia show themselves when the man has a firm, rubbery mass underneath the nipple area. The area is roughly two inches in diameter and is sensitive to touch.

Our talented cosmetic surgeons can remove the glandular tissue, excess fat, and, in more extreme cases, excess skin that is part of gynecomastia. Men whose breast growth is caused by weight gain are not good candidates for surgery. These men should lose the excess weight first to see if their enlarged breasts return to normal.

What are the Advantages of Male Breast Reduction Surgery?

What’s the benefit of being able to take your shirt off and not wonder if people are snickering about your “man boobs?” What’s the benefit of accepting those offers for pool parties or simply being comfortable taking your shirt off when hanging out at Sandbar Park? Truth is — when a man has enlarged breasts it’s something that can make him very self-conscious about being seen without a shirt. 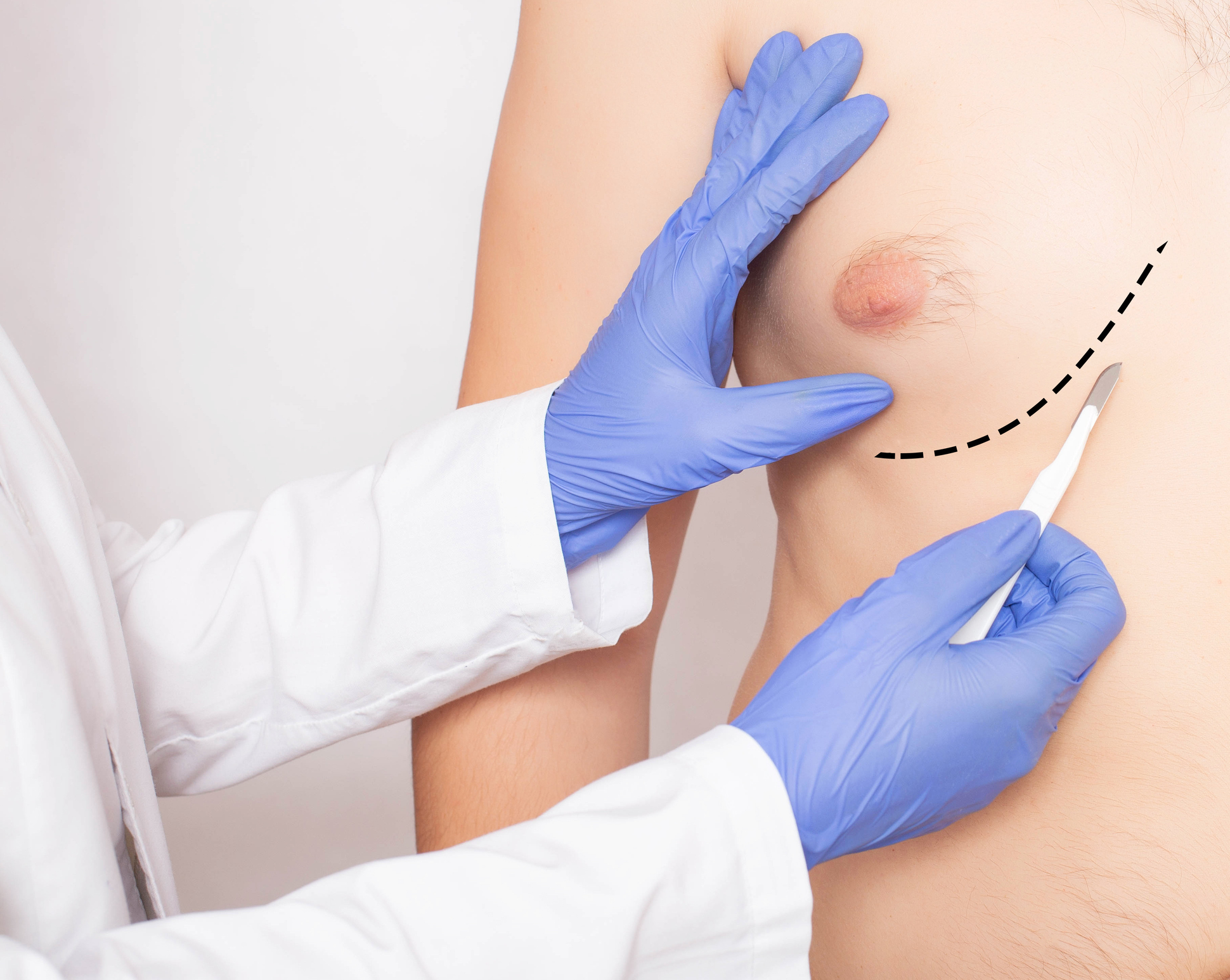 Unfortunately, misperception and misunderstanding surround the issue of enlarged male breasts, and this keeps many men from looking into the problem. Correcting it with the team at Plastic Surgery Group of Rochester is not difficult, and it can really give your self-confidence a boost.

Is there anything I need to do to prepare for male breast reduction surgery?

These are relatively simple procedures, and they won’t involve serious downtime, so you don’t have to prepare to be down and out. You’ll need to prepare as you would for any surgery. Your Plastic Surgery Group of Rochester surgeon will discuss this with you during your consultation. You will have to stop taking any blood-thinning medications, anti-inflammatory medication, aspirin, and most supplements for one week prior to your procedure. These can all lead to excessive bleeding and bruising. If you smoke, you’ll need to stop for at least two weeks prior to and after your surgery. This is because smoking restricts the blood vessels, which impedes healing.

If your job involves any heavy lifting, you’ll have to arrange to have that lessened for about one month, as you need to limit lifting to not strain your chest area.

Gynecomastia is often associated with an excessive amount of glandular tissue. Our surgeons can excise this tissue, entering through small incisions made around the areola. This will minimize any visible scarring. Incisions may also be made in the pectoralis muscle fold at the bottom of the breast to remove excess skin. Glandular tissue, excess skin, and excess fat are then removed. Liposuction may be used to remove fat pockets. In some cases liposuction may be all that is necessary to reduce the breasts.

This surgery is usually an outpatient procedure and recovery is not difficult. The incisions are small and heal relatively easily. You will have some swelling and discomfort, but this passes pretty quickly. We put patients in a compression garment to minimize swelling and to help the chest adhere to its new contour. Drains may be necessary for a few days. You may have some loss of sensation in the treated areas after your reduction surgery, but this is usually short-lived.

How long before I can start exercising again after having breast reduction surgery?

Most of our patients can return to their normal activities after around a week. This includes most forms of exercise, with the exception of any exercise that specifically targets or involves the chest. Those sorts of exercise will need to wait for a month or so.

As mentioned above, these are not difficult or overly painful recoveries. Most of our gynecomastia patients tell us they didn’t even use their prescription pain medication, opting instead for over-the-counter options.

You will have some pain initially, but this passes within a couple days for most patients.

What Our Patients Have to Say

"Dr. Davenport, You are such an amazing person-I was so nervous about my surgeries but you made me so comfortable and eased my concerns and I thank you from the bottom of my heart. I also have to say that your office staff is awesome as well. Your kindness is greatly appreciated. Thanks again!"

Dr. Davenport, Words cannot express the gratitude I feel for you. You have given my life meaning and for the first time in 57 years, I am HAPPY. Thank you so much, You are awesome dude!"

Are There Non-Surgical Alternatives?

There are some alternative options to try before opting for surgery. These can sometimes be successful in reducing breast size and sometimes not. Of course there are various exercises such as push-ups and seated rows that target the chest. Also, since the breasts are primarily made of lipids, cutting down on fatty foods may help reduce your breast size.

In many cases the majority of the breast gland is removed in surgery and the odds of the remaining smaller amount of gland being stimulated are rare. Steroid use, one of the main triggers of male breast enlargement, could cause the breast or breasts to enlarge again. Otherwise, without steroids the odds are very low. However, if breast reduction surgery was performed while the patient was still an adolescent, the odds of a return are higher because the hormones can still be stimulating the gland.

If you are interested in Male Breast Reduction Surgery, contact our office in Rochester, NY today. Call us at (585) 922-5840 to schedule a consultation.

SEE WHAT WE CAN